Here we offer our PowerPoint presentation. If you enjoy videos, have a look. If you would rather read, scroll down and review an outline of the research with a link to the abstract.

Our mission at Integrative Learning Center is to nurture individuals’ health and development, enabling them to serve as active partners within their community. Research is one of the core values guiding us as we fulfill our mission. We participate in research and seek to make valid and reliable contributions to the body of literature, and on July 9, 2017, in Oxford, England, we did just that!

The pilot study,  Alternative Movement Program in Geriatric Rehabilitation: Bones for Life®, was accepted for oral presentation at the 2017 International Conference on Movement held at Oxford University. Carol Montgomery wrote and delivered the summary of the paper, and Cynthia Allen led the audience in a Bones for Life movement process. At the end of the conference, we learned that the full paper was accepted for publication and will appear in the journal of Functional Neurology, Rehabilitation and Ergonomics, Volume 7.

Bones for Life®, a relatively new somatic-based educational program, was the intervention used to assess the physical and psychological benefits this program could offer to the Geriatric population. Partnering with Dunham Recreation Center in Cincinnati, Ohio, community-dwelling seniors with a mean age of 73 participated in a 90-minute Bones for Life class once a week for six weeks.

Four key findings emerged from the pilot study. Two Physical Measures demonstrated the most sensitivity to change, the 360* Turn Test and the 20-Second Step Test. Both tests were timed for speed. The 360* Turn Test involves turning around in a full circle, pausing, and then turning a full circle in the other direction. The 20-Second Step test involves standing on one leg while placing the entire foot of the opposite leg on a step as many times as possible in 20 seconds.

We were surprised by the statistically significant improvement in these test results because BOTH participants with the lowest and highest function level demonstrated improvement. We asked ourselves why?

BFL challenges long-standing, inefficient, and poor movement patterns by their nature or design. Could learning and practicing elements involved in transitional movements be the critical difference that significantly impacted our subjects?

Some Examples of these transitional movements were: moving down and up from the floor, going from sitting to standing using a spiraling motion, turning, lateral exploration of weight-shifting, and weight bear-bearing through different aspects of the feet.

Also, a common element in both tests was the ability to stand on one leg. Bones for Life does not target specific Balance exercises. It uses NOVEL movement activities. We think these movement activities allowed the subjects to sustain a smaller base of support without an increase in postural sway or musculoskeletal demand. Another contributing factor was an improvement in lower extremity alignment patterns. We postulate that alignment patterns changed because of the guided NOVEL movement activities such as spiraling movements with hand-eye coordination, pressing the foot on the wall, and facilitating patterns that involve trunk side bending and rotation.

The third key finding of the study was revealed during the Analysis of the SF-36 Health Survey, a questionnaire that profiles one’s functional health and well-being. In this pilot study, statistically significant improvement was seen in several areas: Vitality, Mental Health, and General Health. Subjects reported that the Bones for Life intervention positively influenced quality-of-life indicators like peace, happiness, calmness, and increased energy. The SF-36 Health Survey (https://www.qualitymetric.com/health-surveys/the-sf-36v2-health-survey/) began to validate and quantify a commonly-reported response that participants in a Bones for Life class describe: a confident sense of well-being and a feeling of vitality and happiness. Ruthy Alon, the originator of Bones for Life, refers to this phenomenon as “Biological Optimism.”

Improvement in the subject’s General Health was even more interesting. Participants in this study perceived that their general health got better. Improving this domain was thought-provoking because subjects self-reported their general health, including past medical histories, reported activity levels, and diagnoses. Regardless of this diversity, positive effects were seen among participants in a very short time. So, we asked ourselves, how in 6 weeks could General Health perception improve when medical history, diagnoses, and activity levels remained the same?

A precept of somatic movement education includes strategies to cultivate awareness – generating a state of mindfulness. The Bone for Life intervention revealed long-standing habitual and inefficient movement patterns. When subjects in the pilot improved their movement patterns, it increased their level of function. As function improved, they felt healthier!

The final key finding of this study was observed in the Post Intervention Interview. After receiving the Bones for Life intervention, 90% of the subjects reported improvement in their balance. However, an improved balance was NOT the primary benefit of the class.

Functional gains and carryover into daily activities were the number one benefit. Subjects stated it was easier to get out of a chair, reach into cabinets, climb stools, change light bulbs, hang clothes, and get down and up from the floor. Also, there was an unpredicted carryover effect as subjects reported improvements in recreational activities, such as playing golf (improved stance, swing, and ability to concentrate during play) and walking programs (increased speed, confidence, improved postural alignment).

Why does a somatic approach to exercise matter? In this pilot study, we discovered maybe, the only difference between quality function and dysfunction is that:

Somatic-based programs challenge students. They ask them to be full participants in learning movements that confront their quality AND their ability to be aware, to think, and use problem-solving skills to improve balance and self-care.

Somatic movement education programs are where function improves through the improvement of body awareness. Thus, movement coordination and the collaborative functions of the skeletal, muscular, and nervous systems are changed. Even when people have an organic problem or disease, it just may be possible that the field of Somatics can help them deal with how they respond to their problem and, therefore, impact their quality of life.

At Integrative Learning Center, we seek to offer programs that bring together the best of traditional and somatic education learning platforms providing an experiential understanding that leads to a higher level of function and improved quality of life. Consider donating and enrolling in a somatic education class for connection, learning, empowerment, and partnership. Read research. 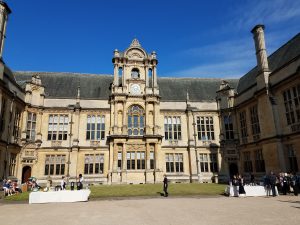 About the Author: Carol Montgomery

Carol is a physical therapist, a co-creator of Integral Human GaitSM theory, a certified Feldenkrais practitioner, and a Senior Trainer in Movement Intelligence. Focus, Align, Teach and Inspire! These qualities not only describe her work, they describe her presence. She is passionate when it comes to reconnecting learning with human function and health. Carol is in private practice at MontgomerySomatics.com in Columbus, Indiana.

The participants in our Bones for Life research project talk about the class.

I was stretched and challenged by the 'Bones' training. Cynthia’s teaching style is humorous and encouraging. Her presentations were very professional yet casual and accessible.

This different type of learning thru physical experience is new for me. I feel awkward and like a child, only not so agile. Upon returning home, I was sitting on the floor with a few women in a small group at home, and each one moaned about their knees hurting when they tried to get up at the end of our session. I stopped myself from struggling to get up along with them, and said," Hey, I just learned how to get up last week." I thought a minute, arranged my feet, rehearsed the spiral mentally, and ROSE up in a spiral to my feet! It was so fun. I take courage from small beginnings and look forward to more revelations.

I greatly appreciate the opportunity to learn with you Cynthia. Your clarity and comfort in teaching is amazing. The work and passion you have put into this process shines through. Ruthy Alon and her work is truly remarkable.

I love the program and must tell you that after the workshop a longtime student told me that he'd never seen my posture and walking look so good. Thank you, Cynthia again for your clarity, your vision and your hard work. I look forward to our next segment, to teaching classes and being your mentee.

The feeling Bones for Life awakens in me gives me hope. I have also been using some of the exercises with the little frail COPD people I serve. It is amazing how gentle and effective it can be. As I guide them to pay attention, they notice how much it opens their breath.

Cynthia really brought the group along. She is supportive, taking time to answer question and also helping me to expand my thinking not just giving away the answers. I feel blessed to have had this chance to study with her and excited about the Bones for Life path ahead.

Christine Cutbush Teacher of the Feldenkrais Method, Bones for Life, and Yoga

Carol is an incredible teacher; timing and pace are artful. You keep on learning and discovering and the joy you experience emanates.

Carol, I love who you are and all that you shared with all of us. You are so present, engaged, passionate and knowledgeable. Your presence shines and for me is an inspiration to teach this work to help others too.

Carol’s compassion, gentleness, knowledge and awareness were very much appreciated and made the whole experience of learning wonderful! I experienced a new way of myself. Instead of trying to change—fix or let go—I am more curious to experience and see what is already there, allowing my natural intelligence for freedom and alignment to be.

I am so grateful for the time spent with you last weekend! You made it possible for me to be reacquainted with this (almost) 70 year old body in a most gratifying way. Learning did take place in a most gentle, logical order that has given me much optimism about the present and the future. Thank you for your discernment, sharing your expertise so creatively and making a very enjoyable experience: new friendships, new confidence, endless potential!

Thanks so much for another amazing workshop! Always useful, always illuminating. Cynthia and Carol are brilliant educators.

This website uses cookies to improve your experience while you navigate through the website. Out of these cookies, the cookies that are categorized as necessary are stored on your browser as they are as essential for the working of basic functionalities of the website. We also use third-party cookies that help us analyze and understand how you use this website. These cookies will be stored in your browser only with your consent. You also have the option to opt-out of these cookies. But opting out of some of these cookies may have an effect on your browsing experience.
Necessary Always Enabled
Necessary cookies are absolutely essential for the website to function properly. This category only includes cookies that ensures basic functionalities and security features of the website. These cookies do not store any personal information.
Non-necessary
Any cookies that may not be particularly necessary for the website to function and is used specifically to collect user personal data via analytics, ads, other embedded contents are termed as non-necessary cookies. It is mandatory to procure user consent prior to running these cookies on your website.
SAVE & ACCEPT